We had a wonderful afternoon at Wright Middle School on Tuesday. Picking up from last week, we continued working with Shaun Tan’s The Arrival. This week, we focused on symbolism in the text, and we approached this topic in two ways. As seen in the picture below, the origami crane is a symbol that appears throughout the book, and we asked half of the class to read through The Arrival, and mark with a post-it not each time the image of the crane appeared. 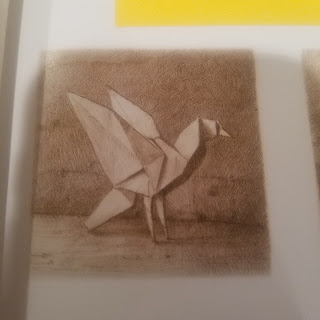 Once this task was completed, the students discussed the symbolism of the origami crane, and cited textual evidence to support their claims for what the crane might represent. As shown in the picture below, many students believed the crane represented hope, love, or family. 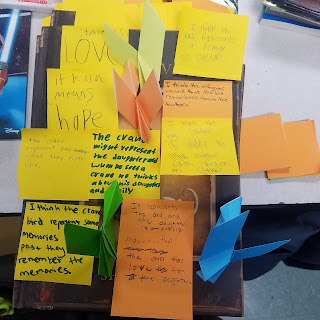 While this discussion was taking place, Cassie led the rest of the class in creating origami cranes of their own, there sure are a lot of crafty students in our Wright Middle School RAPS group! Next week, we will continue with our origami activity, and discuss the remaining chapters of Shaun Tan’s The Arrival!
at 5:32 PM