After a relaxing and enjoyable Fall Break for the RAPS Team and our students, we were so happy to be back in the classroom together! In the past, some of the students had mentioned that they were huge fans of scary stories, so we thought there was no better time than October to dive into some creepy short stories! The RAPS team found some wonderful and frightening texts from the CreepyPasta blog, in which anonymous authors contribute stories in order to hone the craft. One of the stories, pictured below, resonated with many of the pupils, so they drew some reactions to it. 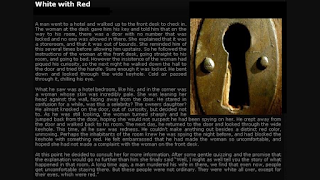 First, though, we tried to introduce them to the genre, as a whole. We asked them to think of scary stories that they had heard in the past. What made them so scary, and why did they stay with you long after you had heard them? Many of them pointed to details such as monsters and the feeling of being threatened, but some others attributed the genre to the unexpected, and a feeling of dread. We drew all of these thoughts together, and we asked them to look out for them as we read. 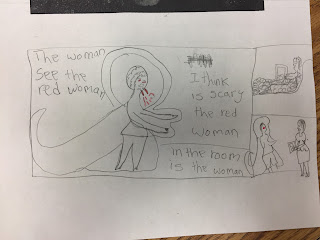 Some of our students wanted to react to the first story, so they drew out memorable scenes and descriptions of the story, highlighting what contributed to the feelings of dread. Others, however, wanted to read more, and experience that feeling all over again. Some of them drew these pictures and discussed how the author made these moves, while others read the remaining two stories, working on some difficult vocabulary and making tough inferences. 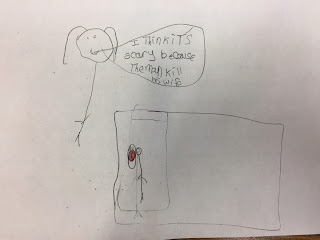 Either way, we thin we were able to bring our students into a new and compelling genre, which they hopefully remember around this spooky month! We look forward to heading back next week. We plan on ordering some more books and having one last scary activity!