Today was fairly laid back with seven readers.  We began with everyone choosing their book for October that they get to take home and keep! A few boys really wanted to get multiple books and had a hard time choosing which one they wanted for October.  In addition to choosing new books to order, most of the students received their September book orders (we haven’t had RAPS for three weeks since before Fall Break). 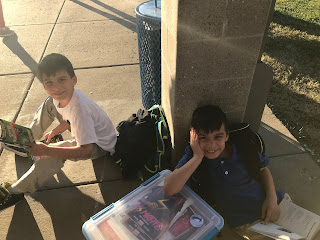 Most were too excited about their new Minecraft Joke Book that they didn’t want to do anything but read and share jokes they thought funny, and since five students ordered the same book and they all read different parts first, we had a great time!

Since almost all students wanted to read today, only two got to the I am from poem.  Though they did not finish it this week, I’m excited to see their final products in the following weeks.
at 4:21 PM