Our time at Wright Middle School was a little odd this week. Most of the pupils in our group were off assisting in the school's production of "Aladdin" for the stage. We only had two students with us this week, but we tried to make the best of it! Rather than go ahead with reading El Deafo and planning their book trailer, we decided to have some fun. First, we played a game called "Blurt!" which works similar to some word guessing games that you might have seen on television. 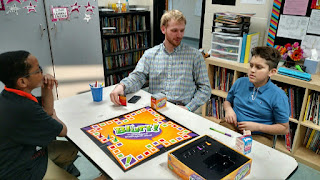 The players have to give clues about a word on a card, as the other players try to guess what the word is. The students really got in to it, but we also think they learned a bit about backwards thinking, critical reasoning, and synonyms, all while expanding their vocabularies in a low-stakes setting. It was also a lot of fun for us to play as well. We also spent some time allowing the students to begin a longer, comic book-style story based on their lives. We got a chance to work individually with both of them, helping them think through the elements of plot and characterization. They also learned a bit about visual storytelling, focusing on some of the strategies we've seen in El Deafo. Both students got the chance to show of their creative side, while learning at the same time: definitely a win-win!

Our co-students of the week are Jimmy and Xavier, both of whom are pictured above with Mr. Hines. Though they were the only students this week, both Jimmy and Xavier are well deserving of the honor. Both pupils bring their best behavior to class each week, and are always willing to put forth their best effort and try some of the creative projects that other students might be a little hesitant to put their best talents towards. They make our times at Wright immeasurably more fun and meaningful, and they are a constant force of positivity in the classroom. Way to go guys!