We're seeing some great work from our young scholars as Spring Break approaches! We got to spend more time with El Deafo, focusing on intentional choices made by the author and illustrator so that the students can learn a little bit about inferences and creative decision making. They're starting to fall in love with the book, and we even found some kids sneaking some reading in as we were moving on to other activities! We also spent some time at the beginning of class doing concrete poetry, in which the poem takes the form of what it is trying to describe. It allowed the students to express some of their interests in a new, fun way, and it seemed to be an activity that they really enjoyed! 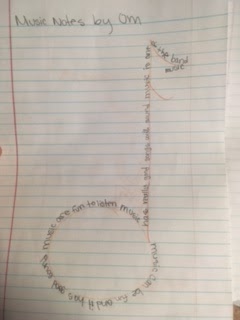 We spent our final moments this week brainstorming for their book trailer, which we hope to get started on in a couple weeks. The students assigned roles and started thinking about filming, which allowed them to think about the text in new ways. This  should also be a good way for students to express themselves, as well as find new forms of engagement with literature. The students seemed really excited about filming soon, and it seemed that a lot of them are thinking about this project in their free time! 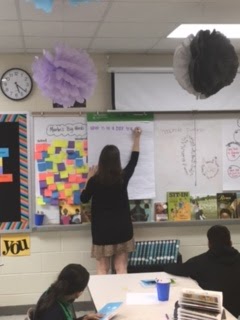 This week's scholar of the week is Adut! She likes reading because it helps her learn about all sorts of new things. She always brings a helpful and willing attitude to our program, and she's a pleasure to work with each week. Way to go, Adut! 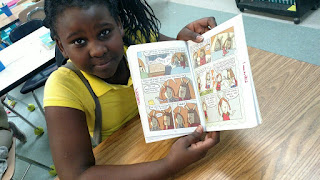 This week at Wright, we wanted to focus on working through as much of El Deafo as we could, so that the kids could start planning for their book trailers in the next few weeks. We really got in to the book because of it! We saw some great impressions, and we hope that all the time we spent laughing and having fun with the text will encourage them to keep reading outside of our time together. We had even more kids ask to take the books back with them this time, and we were a little sad we couldn't let them! We lost track of time at the end, but we started working on ideas for shooting their book trailers, asking them to think of scenes and how they would shoot them. They got some planning done, but didn't get enough time to really flesh them out on paper or in writing. However, we thought everyone might still want to see what they've been up to, so we decided to upload some of their previous art from other weeks! We hope you enjoy! 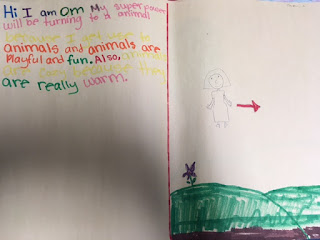 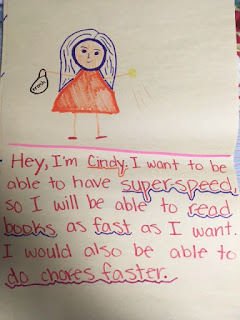 We also wanted to put a spotlight on one of our readers who did a great job this week. This is Patrick. He's a fifth grader at Wright, and his favorite book is Holes. He likes reading because it makes him a better writer, and that's what he wants to be when he grows up. It also helps you figure out life and people. Great job Patrick! 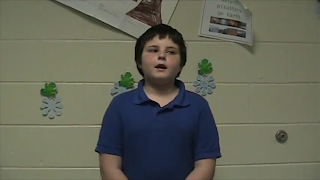 We had another great week at Wright Middle School! We played a warm-up game that got the kids moving around and excited to read. The students made some great progress on El Deafo, learning about predicting and characterization while we did. They love the book, too! Some of them even asked if they could take their copies home with them, but we didn't want any spoilers for the rest of the class. 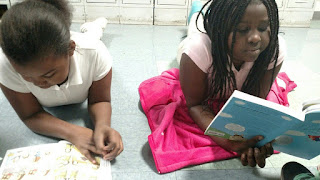 We spent the rest of class interviewing the kids for a short video that we'll try to get up for our next post, as well as introducing the idea of a book trailer that the students will be working on the next few weeks. The concept of shooting some footage about El Deafo, acting, screenwriting, and editing really seemed to get them excited! 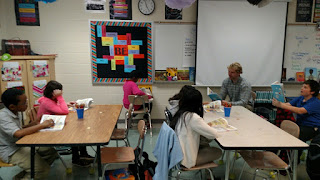 All in all, it was another great week at Wright Middle, and we can't wait to go back!

Getting Started at Wright

Our first week at Wright Middle School went great! After drumming up interest around the school, we were able to spend some time with a group of about twenty students in grades fifth through eight. We started off our first meeting with an icebreaker called "barometer," where we measured everyone's opinions on questions such as, "dogs make better pets than cats" and "vacations to the beach are better than vacations to the city."
After getting to know each other a little better, we took turns reading the graphic novel, El Deafo, by Cece Bell. In El Deafo, the main character, also named Cece, overcomes a hearing impairment to make friends, succeed in school, and find the power that comes from individuality. The kids really loved taking turns reading and speaking for the characters, and we ran out of time leaving them wanting more! 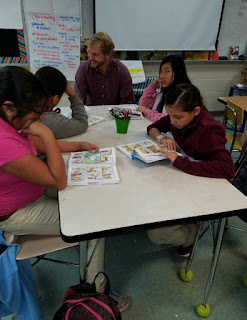 After we spent some time reading, the kids got the chance to find their own superpowers hidden in their personalities. Each of them was asked what their superpower would be, if they had one. However, it had to be based on some aspect of themselves that they found important. For instance, someone who is really optimistic might say that they can fly, or someone who is empathetic might be able to read minds. They got a chance to write down their superpower and their reasoning for picking it, and they got to draw and color a picture to accompany their ideas. 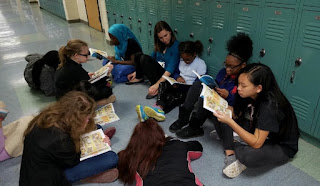 After they finished their art and creative writing, they got the chance to pick out a book for free! Some of the kids opted to take one of the books we had brought in before, and some ordered one from Scholastic, but all of them left excited at the prospect of taking home another book to engage with on their own. We can't wait to go back next week!